Commercial boilers are typically pressurized systems that burn combustible fuel (or sometimes use electricity) to heat water, changing the water’s liquid state to a gas –steam – which is then distributed to provide heating in a building or other structure.

Steam may not be used exclusively for heat. The concept of co-generation has been around for some time, whereby steam is also used to produce power.  But for the purposes of this article, we’re discussing the production of steam in a commercial or industrial setting.

It should also be noted that steam can also be purchased. The NY Steam Company (a division of Consolidated Edison) sells and distributes heat throughout the city to many customers.

Inside a boiler, the burners or electric coils generate heat, which is then transferred to captive water by means of a heat exchanger. The process creates either hot water or steam, depending on the type of boiler. The hot water or steam is circulated via pipes throughout the commercial facility. The water or steam enters radiators or other components that disperse the heat.

Every boiler relies on a continuous heating cycle. Steam may return to the boiler by way of gravity, and when it cools, it condenses back into its liquid state. Some boilers always have hot water at the bottom of a tank, where that water can be circulated to conventional radiators. This is called a hot-water heating loop. It is often seen in residential configurations (usually in basements), where a heating circuit is installed off the boiler and uses a conventional radiator and circulator.

Natural gas is the most common fuel used in commercial boilers. Other kinds of boilers are available that burn fuel oil or that use electric resistance coils to produce heating from electricity. Some boilers rely on bio-fuel. During times of high demand in certain areas, large commercial customers are often forced off of natural gas and must use large stores of fuel oil to maintain operations. This is because the gas utility may have difficulty keeping up with the demand for natural gas in cold weather. In industrial and heavy commercial settings, boiler use is not limited to just heat. 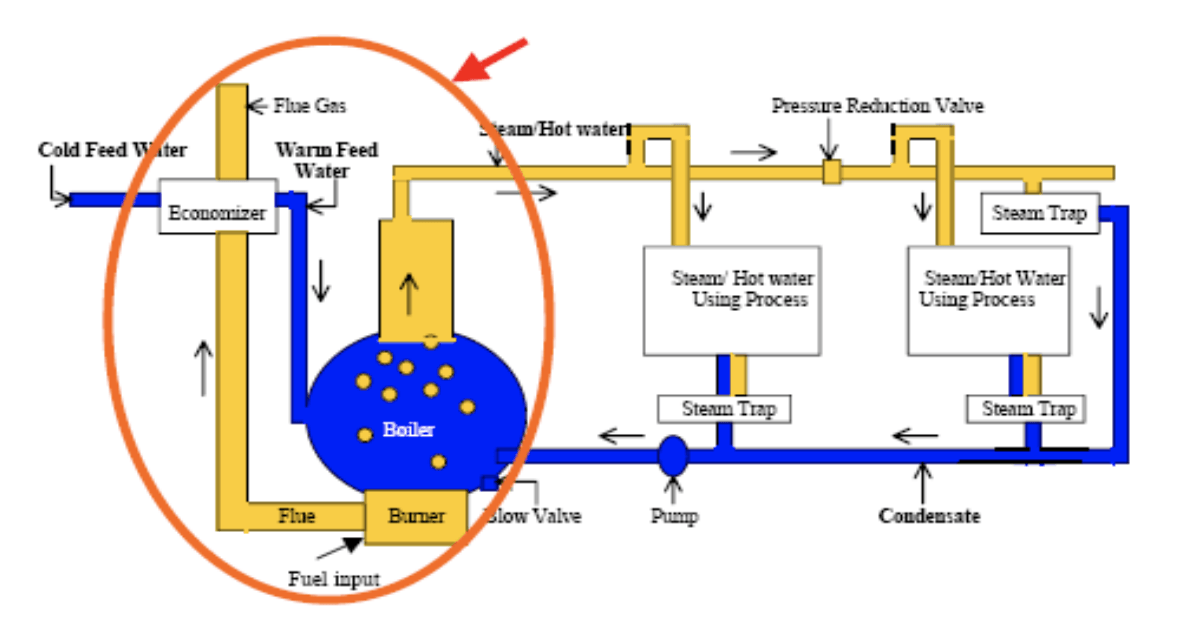 Schematic of an Industrial Boiler System

Inspection records of boilers and maintenance schedules are important. Look for these items when you come across any steam system. High-pressure steam often requires design and installation by experienced and licensed mechanical engineering firms. Installation may be performed by experienced boiler workers and certified welders.

Defective or missing insulation can not only result in heat loss, but for the unlucky person or animal that comes into contact with a hot steam line, their flesh is often left deposited on the pipe. Asbestos-wrapped insulation was often used on steam lines. So, be prepared to ask questions about older buildings that include steam systems and distribution, including when the asbestos was abated, and who performed the work.

Genuine care must be taken to ensure that the boiler is clean and working properly, and that all safety systems are functional and ready to operate when needed. Defective steam plants often result in catastrophic failure, injury, damage to property, and even death. For the commercial inspector, it is important to become familiar with the common critical components of a steam plant, and to discover what the plant is utilized for, as it may not be limited exclusively to the production of heat.